Keeping hobos out of your house

Keeping hobos out of your house

No, the recession isn’t that bad. We don’t have desperate people sneaking into our homes to find a place to live. But there is another critter that does sneak into our homes this time of year, Hobo spiders. And Hobo spiders have a very venomous and dangerous bite, so that’s why my wife reminded me to spray around the foundation of the house today and change out our spider traps. I find that if I do that each year, our basement stays pretty free of hobos and the few that get through we catch in the traps.

Here’s some more detailed information for those of you that want more.

The Hobo spider (Tegenaria Agrestis) is a European spider that was introduced into the Pacific Northwest in fairly recent times. The Hobo Spider was confirmed in southeastern Idaho in 1983 and the established population and range has been increasing steadily.

Hobo Spiders are most commonly encountered from July through October. During this time the mature males are wandering looking for mates. Cooler fall temperatures cause them to seek shelter inside of garages and homes. Hobo Spiders prefer outdoor habitats that include holes, cracks or recesses to support their funnel-like webs. Some common outdoor habitats include window wells, holes in concrete or soil, around foundations (especially those with adjacent tall grasses), under large rocks, boards (decks) and other debris.

While the Hobo Spider is an outdoor spider, it does wander and can enter houses, garages, etc. and be found in spaces between boxes or other items in storage, under baseboard heaters, behind furniture, and in closets. Indoors the hobo is normally found in the basement or ground floor of dwellings. The primary reason for this is that they are poor climbers. However, they can climb well enough on bedding and other rough surfaces to be a problem.

Control methods for the Hobo Spider include:

Measures to eliminate habitat indoors include frequent cleaning behind furniture, in closets, and in undisturbed areas to remove spiders and their webs. Keeping window screens in good repair and in place and keeping all doors to the outside closed when not in use will help keep the spiders from getting inside. Outdoor controls include repairing any cracks or crevices in the home foundation, removing tall grasses from around the home foundation, garage or storage sheds and removing yard debris such as old boards and wood piles.

Avoidance of risk requires an awareness of the situation and using protective clothing while working in potential habitats. Keep beds and bedding 6 inches from the wall and floor. Store clothing, bedding and other items above the floor level and keep clothing and towels off the floor. Control measures such as these may keep hobo spiders from being trapped in them and reduces the risk of being bitten. (Maybe that will convince your teenagers to keep their clothes picked up.)

Chemical control with pesticides can be used in addition to the above methods. Effective applications of Cyfluthrin or Permethrin insecticides on foundations of the house or other buildings can be made and should be used in accordance with label instruction.

Trapping the spiders can also be a very effective method of control. Simply place sticky spider traps in the areas where the hobo spiders are seen. Traps should also be placed near doorways leading outside.

Symptoms of a Hobo spider bite
Most bites from Hobo Spiders are reported to be painless, somewhat like a pinprick. Within 15 minutes after being bitten a burning sensation may occur at the bite site and an immediate reddening around the bite begins as the bite area 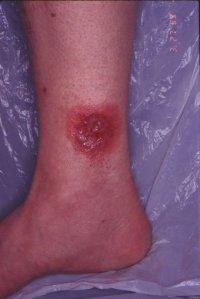 enlarges. Within 15-36 hours blisters may form around the bite. These blisters break within a day leaving an open ulceration that usually scabs over and heals in one to several months. About 50% of those persons bitten and envenomed by a Hobo Spider will develop systemic symptoms in addition to the local effects that include severe headaches, visual disturbances and disorientation, and joint pain within 36 hours of the bite. In these cases immediate medical attention should be sought. However, it is recommended in any case where a Hobo Spider has bitten you, that you save the spider if possible and seek medical attention.