Cutting Back Perennials in Spring

Cutting Back Perennials in Spring

Spring in east Idaho is nearly always blown in by horrendous winds as Mother Nature  tries to overcome her bipolar tendencies and decide if it’s winter or spring. Well, we’ve certainly had some days of horrendous winds lately, so I’m thinking spring should be on it’s way.

With cabin fever giving way to spring fever we gardeners are anxious for any excuse to get out in the garden at the slightest hint of sunshine and warmth. One of the first items on the spring checklist is doing some spring cleaning in the perennial garden.

When to cut back your perennials

I like to cut back most of my perennials in the late fall, but often times the weather turns before I get to it. And even those I do cut back in the fall need another round in the spring. I usually leave a few inches showing so I know where the plants are in the spring. This way I know when a plant didn’t make it through the winter and needs to be replaced. Once they start showing signs of life I remove the remaining dead stems with a gentle tug or cut them off at the ground.

It really doesn’t matter when you cut back the dead tops of perennials, after all they are… dead. So you can do it whenever it is most convenient for you. Just don’t wait too long. As newly emerging sprouts begin to lengthen it becomes difficult to remove the dead stalks without injuring the new growth. So as soon as the soil has dried sufficiently that you aren’t slogging through mud you can get going on it. Even if you like playing in the mud, don’t do it! Walking in your beds when the soil is too wet can compact the soil and cause some real problems. So don’t get in too big of a hurry.

This is a bit too muddy.

If you have planted bulbs among your perennials be careful that you don’t step on newly emerging sprouts.

Which perennials to cut back… and how much

Herbaceous perennials are those that die completely back to the ground in winter.  With these, it’s easy — most are easily removed with a gentle tug. If not, just cut everything right back to ground level.  Fortunately, this includes the vast majority of common garden perennials.  A few examples include Hosta, Peonies, Daylilies, and Garden (Summer) Phlox. Not all perennials need cut back. Here are four basic types of perennials that need a little more care in pruning.

Last year’s dead stems on this daylily detract from the beauty of this year’s foliage and flowers. They could easily have been removed before the new growth emerged

Evergreen perennials will require no cutting back or only a minimal amount pruning of dead or unsightly foliage.  Just trim out the damaged foliage or branches with small hand pruners. Examples of plants in this category include Wall Cress (Arabis), Rock Cress (Aubrieta), Basket-of-Gold (Aurinia), Pinks (Dianthus), Candytuft (Iberis), and Moss Phlox (Phlox subulata). Some of these bloom very early in the spring, so you might even wait until they are done blooming. Then you can trim them back to about half their height to encourage a dense habit. I like to use hedge trimmers for this purpose. It speeds up the process considerably.

Semi-evergreen perennials sometimes stay completely evergreen in mild winters but often they look so beat up that you will want to remove some, or most of the foliage. This category includes various ferns, Japanese Sedge (Carex), Foamy Bells (Heucherella), Coral Bells (Heuchera), Foam Flower (Tiarella),  and Bergenia.

Shasta Daisies (Leucanthemum), Coreopsis, and Rudbeckia die back in late fall, but they keep rosettes of evergreen leaves low to the ground that become the new growth in early spring.  Remove the dead upright tops, but leave the rosettes near the ground. If some of them look poorly you can remove them, but if you just ignore them the new spring growth will quickly cover them up.

Woody Perennials are better left alone until well into mid-spring when new buds begin to appear along the base of the stems.  You will want to leave about 6 inches of woody stem at the base for these new buds. Cutting these plants back to the ground will sometimes result in their death as they don’t readily send new shoots up from the root. Some examples in this category include Artemisia ‘Huntingdon’ and ‘Powis Castle’, Butterfly Bush (Buddleia), Blue-beard (Caryopteris), Shrubby Wallflower, (Erysimum ‘Bowles’ Mauve’), St. John’s-wort (Hypericum), Lavender (Lavandula), Tree Mallow (Lavatera), and Russian Sage (Perovskia). 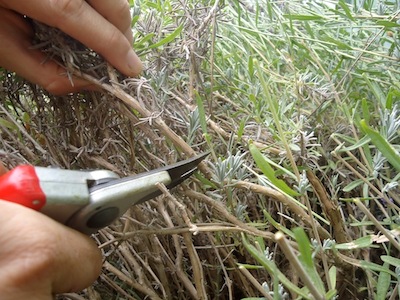 So get out there and play in the dirt!
The best way to get rid of cabin fever is to get outside and play in the garden. You know how busy you will be when planting season arrives, so any chore you can get done now will be one less to do when spring really does arrive. Cutting back your perennials is one such chore that doesn’t have to wait.